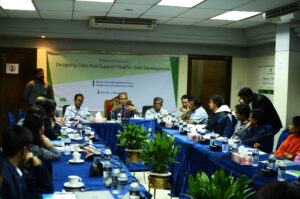 On March 12. 2018, Disaster Management Watch organize a national level dialogue on “Designing cities that supports healthy child development’ held  at Chameli Conference room, Department of Environment in the presence of key national and international level stakeholders. Director General of the Directorate of Environment, Dr. Sultan Ahmed was present as the honorable chief guest in the dialogue session. Besides, Secretary of the Dhaka North City Corporation, Dulal Krishna Saha, Directors of the Department of Environment, and representatives of the capital development authority was participated as the special guest. Representatives of various National and International Development Organization and professional organizations, Town Planners, university teachers including DM WATCH staffs was also present in this dialogue session.

Mr. Bayazid Hasan, Managing Partner of DM WATCH, delivered welcome speech to the participants on behalf of DM WATCH at the beginning of the dialogue. After the welcome speech, Md. Raju Ahmed Masum, on behalf of DM WATCH has presented the research report on ‘Designing cities that supports healthy child development’. In this study nine spots in the Dhaka city where children travel through those spots frequently, were surveyed for measuring sound level. In all this spots average sound level exceeds the permitted sound level mentioned in the noise pollution control rule, 2006. The study also find out due to lack of awareness and lack of implementation of the existing law noise pollution is having a detrimental effect on the health of the children. The report further says that if the government and regulatory bodies do not take any effective coordinated actions to resolve the problem right now, it will cause a marked public health problem in the future. Following the presentation of the research report, the Department of Environment has highlighted the steps taken by the Directorate to control noise pollution. Besides, Secretary of the Dhaka North City Corporation, and the representatives of the capital development authority, emphasized the importance of sound pollution as cross cutting in their various development programs. In addition, the speakers of the dialogue also emphasize the need of strict enforcement of the law in controlling noise pollution and increase of public awareness. They also emphasize the involvement of noise pollution topic in national education program.

In the concluding speech of the dialogue, chief guest and honorable Director General of the Department of Environment, Dr. Sultan Ahmed briefed on the future plan of Department of Environment about noise pollution control and opined that participatory, feasible and effective implementation is possible by the coordination of stakeholders in proposed noise pollution prevention project by DoE.

Ready to start your project with us?